Coming Out is a Revolving Door

I was seven years old when I first heard the word lesbian. I was on the playground with some kids and it was hurled like a snowball with a rock in it at some girl on the swings. “Whore” was an added rock inserted tightly within the same sentence.

“What’s a lesbian?” I asked another girl near me.

“A dirty girl who loves other girls like a boy.” Was the succinct, know-it-all answer.

“Then what’s a whore?” I persisted again for clarification, feeling my own face grow hot.

“A dirty slut, that’s what!” she retorted matter-of-factly like she had the whole dirty dictionary in her mental Rolodex.

This was 1978 in Aurora, Colorado. There was no such awareness in my little 70’s suburban hemisphere to know that my little feelings and crush on Debbie Harry of Blondie or Kristy McNichol were indeed natural. (Later, I would color myself impressed on what sharp Gaydar I had in my early years!)

There were no “out” LGBT families in my life, no visibility of what a positive gay or lesbian role model looked like for decades. My lesbian role models were the wayward and wanton women in movies and TV, who invariably “Got what they deserved”, which meant they were killed or raped ruthlessly to straighten them out.

When I was ten, I fell for my best friend in 4th grade. We were both new to moving to Littleton, both had feathered blonde hair, and both swore like sailors. She was slightly taller than I was. I hadn’t quite worked out the dynamics of it, but I found myself more and more wanting to be “exclusively” her friend, becoming jealous of her time with others, and angry that she liked Brian Chesterworth just because he could play basketball and I was knee high to a grasshopper and 49 pounds soaking wet. 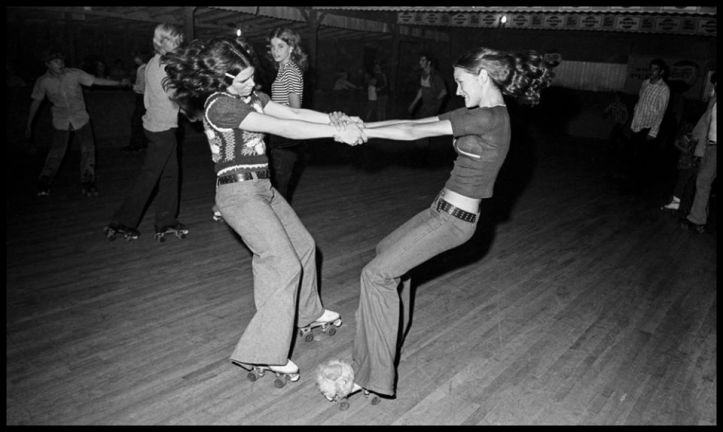 I wanted to run my hands through her stringy blonde hair, I wanted to share puffy stickers and talk about our dreams of owning horses and chimpanzees and becoming veterinarians. I wanted to slow skate with her at “Skate City”, with purple combs in our back pockets.  I wanted to rock out to Queen’s “Another One Bites the Dust” on my RadioShack cassette recorder, which seemed a most befitting love song, considering the circumstances.  Most of all, I wanted to do K-I-S-S-I-N-G with her.  Jenny made me feel tingly inside and sweaty in my hands; all the signs were there. There was only one problem. Jenny wasn’t gay. Not even a little bit. Oh, we may sing “Forever in Blue Jeans” like a star, but she wasn’t a dirty girl like me.

She sure wasn’t a saint, by the way we both caked on too much powder blue eyeshadow and mascara and Bonne Bell lip gloss, but she wasn’t my kind of sinner. Her kind of sinnin’ was G-rated fun that would hardly raise the eyebrow of the staunchest of seventies fathers. My kind of sinnin’ was the bad kind, with pitchforks and hell fire and a whole lot of wailin’. This was made especially obvious after my dad and mom split up and dad became a “Born Again” Christian. Might as well paint my sin neon orange with flames on the sides and wall to wall carpeting.

For this reason, the myriad of well-meaning religious people in my personal family, and the fact that Jenny wouldn’t know what to do with my lady-loving heart, I kept my trap shut. I didn’t want to disappoint others. I didn’t want to lose their friendships, their love, their trust, even if knowing me was a lifelong deception that I never recalled having a choice about.

For the next 28 years, I subsisted on breadcrumbs of crushes, false hopes, drunken make-out sessions, lots of compensatory heterosexual sex, and 2 failed marriages. My first attempt to declare my love to a woman when I was 21 was met with such devastation, I ran back into the closet for the next 17 years.

That time, I had at least had the fortune of knowing one healthy lesbian couple that defied all the expectations of bursting into flames for their love. While I didn’t succeed in staying out of the closet then, I at least had a better feeling that I wasn’t such a horrible wretch of a person. I’m forever thankful to these two ladies with their folk guitars and love and patience to accept me for who I was, even when I was sure I was unlovable.

At age 38, most women have an epiphany or a realization of the situation they find themselves in. It could be their version of a mid-life crisis, but I like to call it “the reckoning”.  This is when they take a hard look at all the areas in their lives spread out over the coffee table; things have “settled on”, jobs and relationships they have “put up with” thus far, and choices they have made that have held them back. It is the year for many of my friends, including myself, where I looked in the mirror and said “Is this really as good as it gets? Have I even lived up to any of my full potential?” For me, the question got more personal.

“Am I really going to live this way for the rest of my life, living a lie and pretending I am straight for the sake of making everyone else happy?” And the answer was a resounding and booming pre-ordained “Hell NO!”

From 38 on, I started to take back myself, my life, and to finally come out to friends, family, and anyone who walked too closely to my front porch. After a very difficult and painful divorce, and facing up to all the aftermath, …. the scariest demons were my own fears.

Yes, my biological father stopped speaking to me for 2-3 years. We had already had our troubles, and I knew it wasn’t going to be an easy road, but I was determined to live authentically for the first time and let my family and friends know me or reject me with all the cards on the table. What I discovered were SO many more positives than I ever could have imagined.

I met a whole new community I had barely known existed during the 8 years I lived in the same Californian central coast town. I met so many beautiful women who were also “of the chunky shoes and keychain” variety. I became heavily involved in my LGBT community to help hold the door for others when they were ready to come out. And I found and married the absolute Love of my life; a beautiful woman inside and out, who loved me in all the ways my 10-year-old lesbian heart could have imagined….and then some!

Most of all, I realized that the worst kind of hell, the hell I was so worried about, was the hell I was putting myself through every single day I felt I was unworthy of love. No amount of hatred I have felt from others, no amount of punishment or pain or retribution could equal the torture of telling myself I was unnatural and I would never find anyone who would ever love me the way I loved them.

(“Lesbian is 100% effective for all unintended pregnancies. You should consult your doctor about Lesbian and make sure you use it correctly at all times. Lesbian does not protect you automatically from STD’s, drunk texts, crazy ex’s, extra cats, or making ‘sensible’ choices in footwear…)

It happens when you drop your child off at school and you must correct their emergency contact lists. It is a never ending revolving door of correcting a misunderstanding, clarifying assumptions, defining human rights, and holding fast to the grounds we have recently won in the name of marriage equality and in the military. It happens when you have a conversation with a stranger who might have pre-conceived notions about the LGBT community until the two of you start sharing your own family stories; realizing you have way more common ground than differences. It happens when you share your story, like I am doing today. I’m holding the door open for you…. when you are ready.
I dedicate this Coming Out story to Barb and Karen. Thank you for holding the door open.

Motherhood, Marriage, and Mayhem in the life of an adult with ADD.